Every morning, Mrs. Henderson would walk her 7-month old Border Collie pup, Scout, for one mile around the neighborhood. Scout, true to his Collie nature, was always vibrant, eager, and playful on his morning walks. He loved to sniff everything and meet new humans and dogs with obvious delight.

One morning, Mrs. Henderson noticed a drastic change in Scout’s behavior. It began as they left the house, when he seemed timid and afraid to walk past the garbage bins that had been placed out overnight. Next, he started barking as a child rode past on a tricycle and it took several moments for Mrs. Henderson to calm him down. Lastly, he approached strangers hesitantly, as if dipping his toes in the water.

What was wrong with Scout? Mrs. Henderson was worried that he might be sick. She called Scout’s trainer who explained that Scout was not sick—he was simply entering his second fear period.

What are Fear Periods in Dogs?

Puppy fear periods or fear stages are normal milestones in puppy development, and all puppies go through them. During these times, puppies are extremely sensitive to traumatic experiences, and scary incidents that occur during these stages will imprint deeply into a young dog’s mind, affecting behavior for the rest of their life. Therefore, it is important for puppy owners to anticipate the onset of a fear period and avoid any negative or alarming events during a puppy fear stage.

The first fear period occurs relatively early in a dog’s life, when puppies are between 8-11 weeks old. The second fear period, which also lasts roughly 2-3 weeks, will occur less predictably between the ages of 6-14 months.

A dog’s individual rate of sexual maturity and growth align with the onset of the second fear period. For example, a Chihuahua, who will be physically mature much sooner than a Great Dane, will likely experience their second fear period closer to six months, while it could happen in the Great Dane closer to the 14-month mark. 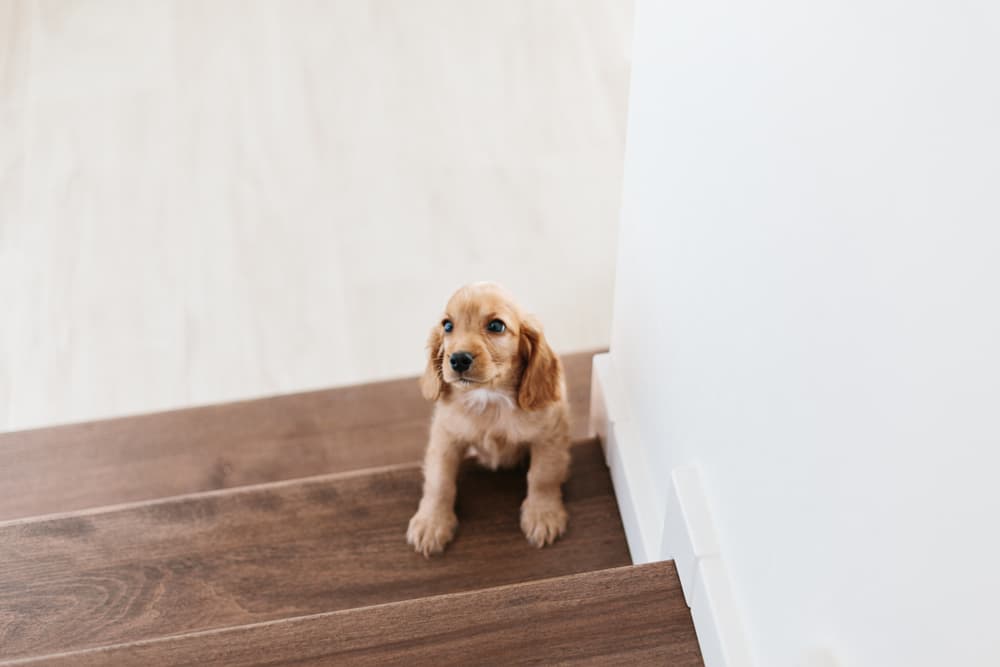 Several critical developmental periods occur during puppy maturity, and puppy fear stages are among them. As previously mentioned, fear periods in young dogs are normal, and all dogs of all breeds and sizes will undergo them.

It is believed that these periods of fear in adolescent dogs will provide them with their “fight or flight” instincts. In other words, they are learning what they are supposed to be afraid of and subsequently avoid for survival purposes.

During puppy fear stages, a single intimidating or painful experience will have a lifelong impact on the way your dog responds to that stimulus. This phenomenon—referred to as single-event learning—means that it takes only one negative incident with a particular trigger to cause an intense, permanent emotional response to that trigger in the future, regardless of the circumstances.

From a survival standpoint, this learning style makes a lot of sense: puppies do not need to encounter life-threatening situations more than once to learn that they should be avoided.

However, in today’s world, where our canine companions are typically well cared for, sheltered, and protected, these stages are not as necessary as they would have been in the wild. We can now use these stages to our advantage, to help the fearful puppy overcome his alarm and build trust in your relationship, which can prevent behavioral issues later in life. 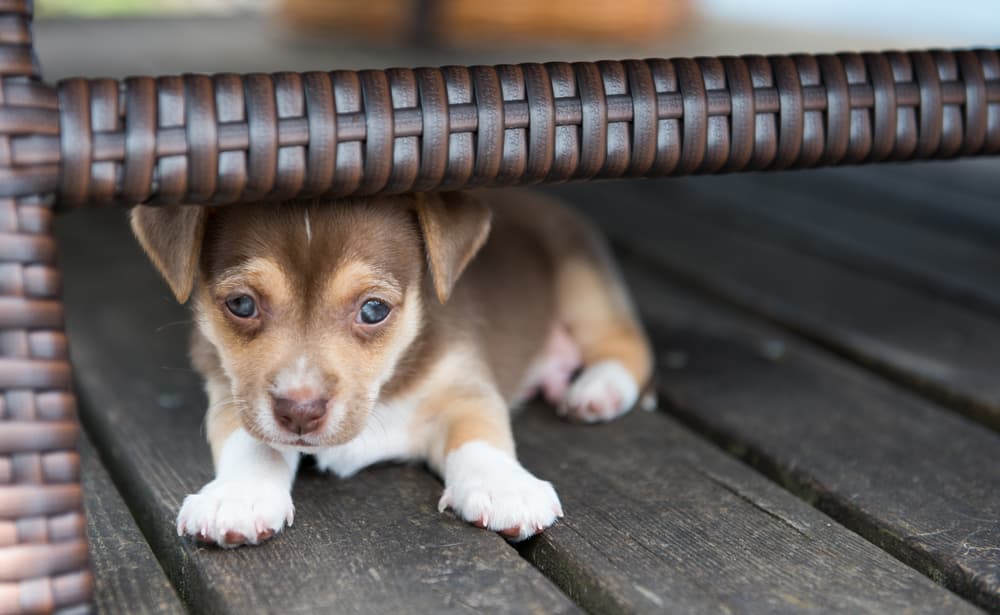 The first fear period coincides with the age that puppies are being separated from their mother and introduced to their new owners and homes. This is the time new owners will manage a puppy’s environment the most carefully and provide ample stimulation and socialization. New owners are also still familiarizing themselves with their puppy and might not notice any changes in their behavior. Therefore, the first fear period often passes unnoticed.

The second fear period in dogs is often more pronounced and confusing for pet parents. Suddenly, their bold and adventurous canine companion becomes timid and hesitant. Their behavior towards familiar, or even unfamiliar, situations might change extremely, such as Mrs. Henderson’s experience with her adolescent dog, Scout.

Fear behaviors vary widely between dogs, from cowering underneath the bed to suddenly snapping at other dogs or humans. It’s important to realize that a dog’s aggressive behavior is often fear driven, especially when these behaviors are uncommon for a specific pet.

Whining, barking, or excessive panting are also telltale signs that a puppy is fearful or stressed.  Freezing in place, refusing to come out from a secure place, or trying to run away can also be signs of distress or alarm and may accompany a fear period.

How to Help your Puppy Through a Fear Period 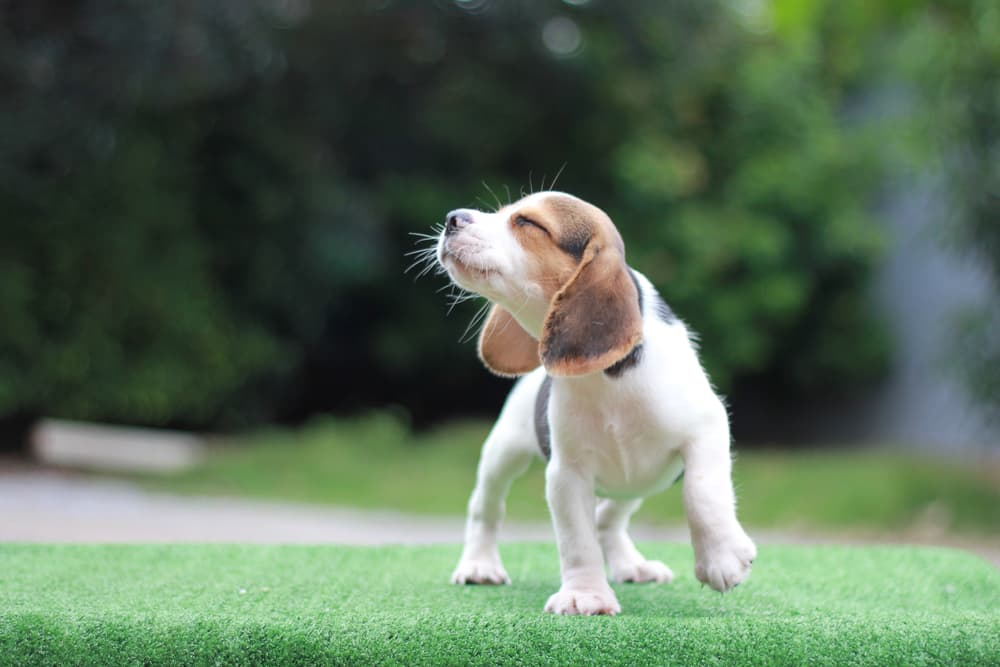 Dogs often pass through the puppy fear stages without any necessary care, however, a pet parent’s response to an adolescent dog’s fear can help prevent lasting behavioral issues. Here are some tips for helping your dog through a fear period.

Stay calm. Firstly, do not panic or react dramatically when a puppy exhibits fearful behavior. Instead, speak in a normal, relaxed tone of voice, showing your young dog that you are not scared or concerned. Avoid speaking in soothing tones and overly comforting the pup, as that can reinforce the behavior.

Avoid the trigger or fearful situation. Do not force your fearful puppy into a situation that makes him uncomfortable, as this will likely cause him to become more afraid. The more frightened your dog becomes, the harder it will be to wind him down. In contrast, calmly move away from the trigger at a typical pace and find an area to loosen up.

Redirect the focus on something that your dog enjoys. Practicing commands such as sit, stay, and shake can help your dog concentrate and forget about the fearful trigger.  A favorite toy can also be a great distraction, as well as playing frisbee or fetch if your pet enjoys those activities.

Supervise socialization. Creating and facilitating enjoyable socialization experiences is important for all puppies, but can be extra beneficial during these times. It is important to supervise your puppy diligently while playing with new dogs, and avoid contact with other dogs whose behavior is unpredictable. Bring puppies hungry to social events with humans, such as veterinary visits, and bring their favorite treat along. This will make them more likely to accept treats from strangers and break through their fear.

Despite our best efforts, we cannot protect our pets from everything. We are unable to predict every incident that will occur in this world, nor how our puppies will react to them. However, what we can do is recognize the onset of a fear period and react accordingly with positive behaviors to help our dogs adapt.

Why is My Dog Panting and Restless?

Are Dogs Afraid of the Dark?

How to Build a Dog’s Confidence