Sadly over one million dogs are relinquished by their owners to shelters each year (1), many because of behavioral problems including aggression (2) (3) (4). But not all aggression in dogs is related to malice, trained behaviors, or instincts—some canine aggression is due to fear.

Fear aggression in dogs is a treatable problem if we understand why the dog is aggressive and commit to a behavior modification plan that decreases the dog’s anxiety.

Your partner in pet wellness has products too! 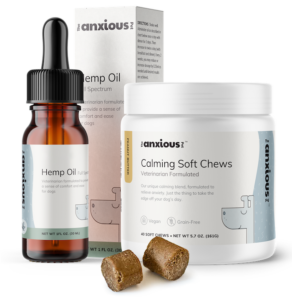 What is Fear Aggression?

Fear aggression in dogs is a form of self-defense and may be expressed toward people, other animals or even objects. When a dog feels threatened, they may use body language or behaviors to drive the threat away, increasing the distance between themselves and the threat.

A frightened dog may freeze, flee and/or fight. For example, a dog may freeze, falsely giving the impression that he’s tolerating petting from a stranger, when in fact, he’s petrified. Once the stranger turns to leave, the fearful dog may take the opportunity to lunge and snap, before running away to hide. All three behaviors—freezing, fighting and fleeing—occur because the dog is scared.

In some situations, fear aggression may be a normal behavior. For example, if a sleeping dog was suddenly woken up by an unfamiliar dog, barking and growling is an understandable response to the intrusion. A dog might show a similar response if a human family member or visitor tries to give them a pet while sleeping. This response may cause the dog’s owner to become upset. However, in both cases, the dog responded aggressively because they were fearful when disturbed, regardless of who woke them.

Recognizing that fear plays a role is essential to treating fear aggressive behavior.

Causes of Fear Aggression in Dogs

Any experience that causes fear in dogs may also cause fear aggression. Common situations include:

Interactions with people or other animals. Both familiar and unfamiliar people—particularly if they are invading a dog’s personal space—can cause a dog to become fearful and aggressive. Bending over the dog, reaching toward him, hugging or petting may cause the dog to feel trapped and uncomfortable, similar to a person who receives unwanted attention from a stranger.

Being approached in confined spaces. Approaching a dog who is under a bed or table or in a dog crate may also elicit fear, especially if the dog retreated there to hide. Dogs may also feel trapped when they are approached while on the couch or in small or narrow spaces (such as hallways or between items of furniture) may also react out of fear, since it is harder to avoid confrontation.

People that look or act different. People wearing clothing or carrying objects that alter their appearance (hats, sunglasses, bags), or appear or behave in an unfamiliar way (wearing a uniform or costume, limping, dancing) may cause a fear reaction in dogs.

Fast, sudden or unexpected movements and sounds. People moving quickly or unexpectedly (visitors standing up or exiting/entering a room, joggers, skateboarders) or making loud noises (cheering) as well as objects that do the same (trash trucks, lawn mowers, vacuums) may also trigger fear or fear aggression.

Environments or situations that have been scary in the past. If a dog had a negative experience at a veterinary office or a grooming appointment, it may cause them to be fearful when visiting.

Similar to people, some dogs are more fearful or aggressive than others. This may be due to their genetics (8) or inadequate or inappropriate socialization at an early age (9).

Learning also plays a role in the development of fear aggression. Previous traumatic experiences may establish negative associations. For example, if a dog was attacked by another dog on a walk, they may start to bark aggressively at all dogs seen on walks. Fear-aggressive dogs may learn that growling or snapping successfully prevents a scary experience, such as a nail trim, from happening. If this is the case, the dog is more likely to growl the next time their owner approaches with the nail clippers.

As with all behavioral problems, physical illness—especially those that cause pain or discomfort—must be ruled out or treated before assuming the dog’s behavior is due solely to a psychological cause. If your dog exhibits sudden aggression, take your dog to the veterinarian for a check up immediately.

Signs of Fear Aggression in Dogs

Before fear aggressive dogs growl, snap or bite, they often exhibit early warning signs that they are uncomfortable. If you catch these early signs, fear aggression can be prevented.

Signs of fear that may happen before aggressive behaviors in dogs could include:

Movement: Movements that may indicate fear include trembling, panting, avoiding contact or hiding, standing still or freezing, pacing or agitation.

Dogs may also exhibit “displacement behaviors” such as lip licking, scratching or sniffing. Displacement behaviors are normal behaviors that are out of context for the situation. This is similar to a person tapping their foot or playing with their hair when they are nervous. You may see these behaviors prior to or in addition to the signs above.

It’s important to note that a wagging tail does not necessarily mean that the dog is friendly. Aggressive or nervous dogs may also wag their tail. Generally speaking, a happy dog will have a wiggly backend and looser tail wagging in a wide, sweeping arc. An aggressive dog’s wag is narrower and his tail and body will be stiffer.

If the dog is barking aggressively, snarling (lip curl), growling, snapping or nipping they have already reached their limit. Stop interacting with the dog and leave the situation. Just because a dog has not yet escalated to biting does not mean that they won’t bite in the future.

Dealing with and overcoming fear aggression in dogs involves a few key steps.

Keep your cool. Do not punish your dog when he is aggressive. Keep in mind that your dog is aggressive because he is scared. Yelling, hitting or pinning your dog to the ground will make him more fearful and increase the likelihood of aggression.

Learn your dog’s language. Watch your dog’s body language and behavior closely to recognize early signs of fear and anxiety. If he is worried, remove him from the situation before he becomes aggressive.

Know your dog’s likes and dislikes. Set your dog up to be successful by actively preventing situations that your dog finds threatening. For example, if your dog is nervous around new people, confine him to another room with a treat or toy when you have visitors.

Reduce fear. Over-the-counter products including supplements, pheromone products, body wraps, and calming music may reduce your dog’s fear or anxiety. Choose products that have been scientifically tested to ensure they are safe and effective. Talk to your veterinarian to determine which products would work best for your dog.

Seek professional help as soon as possible. Do not wait for your dog’s behavior to resolve on its own. Fear aggression is unlikely to improve with time. Consult with your veterinarian to rule out physical causes for aggression. Your vet may be able to recommend over-the-counter anti-anxiety products, provide a behavior modification plan or refer you to a positive-reinforcement trainer in your area.

Canine fear aggression is a treatable, but serious emotional illness that impacts the welfare and quality of life of you and your dog. Understanding that your dog is acting out of fear, catching early signs of anxiety and working with a behavioral professional to implement a behavior modification plan tailored to your dog will improve the odds of successfully overcoming fear aggression in your dog.

References Cited in This Article

Why is My Dog Panting and Restless?

Are Dogs Afraid of the Dark?